A Vampire's Strength Grows to a Limit 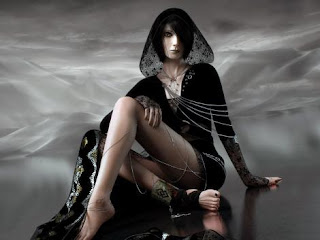 The more human blood a vampire drinks, the more power they gain as they age. However, there is a limit to that power. A physical restraint that is capped at around 2,000 years old. After that, all vampires are equal, unless they have a gift that sets them apart. Such a gift is the gift of Focus centered on the body of the individual. Allowing them to reach the maximum at a far younger age and then exceed it later.
If you were to have one of these Elder Vampires test themselves for you, you would find a surprise. An axe the size of a truck normally has no problem cutting through anything. But on against an elder, it would only cut his skin. Nothing else would be hurt. The reason why is that a vampire's skin is their only weak point. Which is why their skin burns in the sun. Though an Elder Vampire is immune to sunlight exposure.
Email ThisBlogThis!Share to TwitterShare to FacebookShare to Pinterest
Labels: Vampires