How To Kill A Vampire. Wooden Stakes And Crosses Just Don't Do It Anymore. 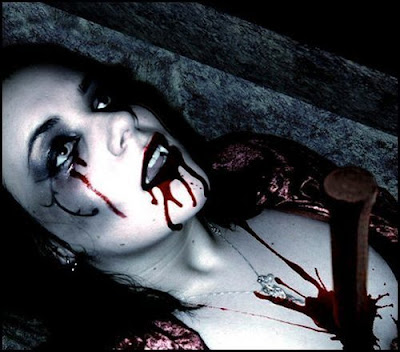 In the olden times, there was talk of priests with wooden stakes and holy crosses defeating vampires on their own ground. Bullshit. A stake is no more irritating to a vampire than it is a human. A splinter is a splinter no matter who you are. The difference is that a vampire regenerates from it quickly, a human does not. A holy cross is about as effective converting blasphemous hell bent atheists as it is wounding someone. A vampire will laugh at you if you threaten them with a cross. They might even show you theirs. Some vampires enjoy the comfort that faith brings.
To kill a vampire is a difficult task. Silver does work, but it only inhibits a vampire's physical abilities. Regeneration, speed, strength, all of this is slowed by the amount of silver that gets introduced into a vampire's blood stream. A knife, a sword, a momentary cut to the skin can only affect a vampire slightly. liquid silver if ingested, as per a drink, could do some damage. reverting them to a weakened state could make them less able to fend off a large human attacker. However if someone could inject liquid silver into a vampire's blood, it would make them sick. reducing them to near death in a matter of minutes. Since they have a hyper metabolism and an increased heart rate, they are affected quickly.
All and all, the moral is, don't try to kill a vampire. It's not nice to kill people no matter who they are. So don't.