Masochism at its Finest

12 years ago I remember submitting 187 query letters. That was painful. The amount didn't hurt, only getting used to the silence. At the time I didn't really know that the silence is normal in this industry.
Last night I began to consider something. I've been listening to a lot of audiobooks lately, and a single audio publisher kept coming up. So I began to do a little research. I found that this company publishes almost everything I like. I found that they tend to choose stories that they enjoy. And I found that they're willing to work with authors that have tried to put their work out there already. They seem like a really good company. And that's why this is such a hard decision. 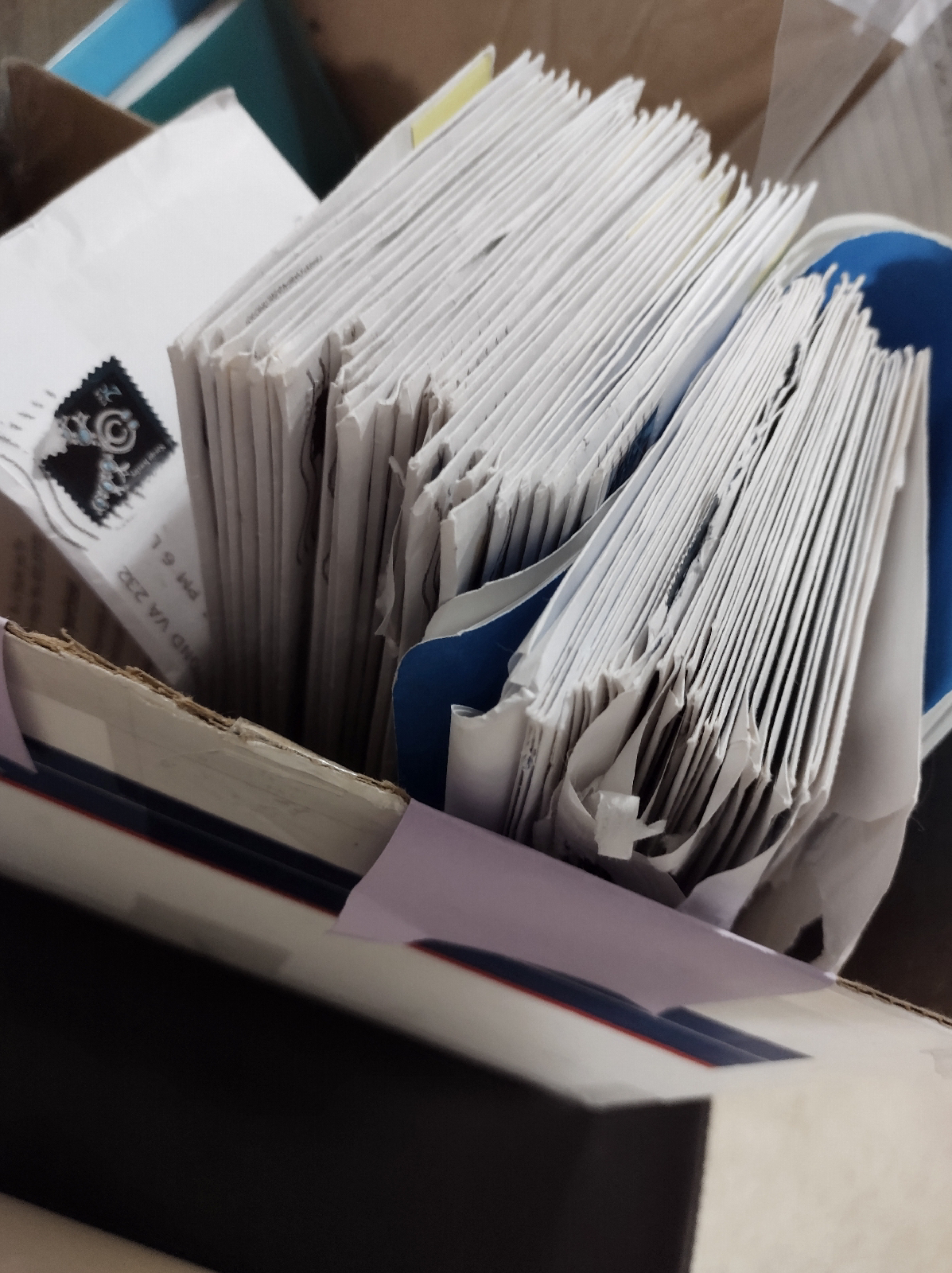 This is the stack of returned mail from that campaign 12 years ago. I've had it on my bookshelf ever since. Actually it was on top of my bookshelf out of my line of sight, for a good reason. I didn't think about it until I pulled it down, but even looking at the stack of envelopes brings me pain. At the same time I'm still considering inviting that pain back. I want to do it again. I want to try again with the experience that I now have. I've written more. I've read more. I've grown up. And more importantly I understand more. I know to expect a lot of silence. I know to expect rejection. And I know when not to get overly excited when the first glimmer of interest is shown. Temperance is a wonderful teacher in that regard. Of course I can say this now, but back then I felt like a small slug of metal being hammered into a shape that I didn't want to be. And with all that comes back to me, like a weight on my chest, I still want to try again.
I miss my characters. I miss getting to know them and their adventures. I miss knowing what they think and how they would react to anything I would throw in front of them. I want them back. And I see this as a way to rekindle my connection to them.
So yes, I will try again. I will be more selective this time around in my queries, but I will try.
This weekend I will be writing the first query. The first step is to follow the signs on the road laid out by an agent. When every marker and correct maneuver has been made, I see myself getting to the end of that road. From there it'll require more hard work. More rewrites. And I know at least a little more pain. But as I said, I'm willing to try again.
Bring on the pain.
Sincerely,
Virgil Allen Moore
No comments:
Email ThisBlogThis!Share to TwitterShare to FacebookShare to Pinterest
Labels: queries, Writing

The White Mage - Chapter One

This is a little different than my normal writing, but I've been a bit too lazy lately and this it seems has picked me back up, so I'm running with it.

This is the first chapter of my new story, The White Mage, Nicess the Wanderer. I hope you enjoy it.

I am the god-damn phoenix down mother fucker that goes ba-bump in the nightmares of all those who Wilhelm their last.
I am the white mage.
At least that's what I think I am in this world. Where ever the hell this is, I seem to know it a little too well.
At the edge of town, there is an inn with a bar on the first floor. It’s the place where everyone knows my name. And why shouldn’t they know my name? I’m the one that saves their lives on a weekly basis. All manner of adventurers come through, but they all ask for one thing if they’re smart. And where can I find a healer? And the barkeep points to a table in the back where I usually sit. Most of the time, it’s a large burly He-Man that wants someone to keep him healthy for an upcoming raid on whatever threat of the week. Other times it’s a lone ranger looking to stop a bent wizard trying to raise an army of mutant orcs. And yet still I’ll get the occasional twit that asks me to bring back their dead loved one that passed more than ten days ago. But the answer to all but a few of them is the same. Fuck off; I’m busy. And that’s when most swords, bows, or fists are drawn and readied to strike. It’s my mouth that gets me into these kinds of trouble. A year of it and you’d think I’d have my fair share of cuts, scars, and bruises. But, you’d be wrong. For if there’s one thing I’m good at, it’s preventing damage before it ever happens. A simple Sanctuary spell with a side of Shield on the ready is all I ever really need. And less than an hour later, another one walks right back up to the bar, and it starts over again. It’s a fresh cup of mead, but the same story. And until then I wait patiently.
For what? If not something new, then something old. New spells. At least to me. Each time I accept work, cure a disease or raise the recently dead, it’s in my never-ending search for knowledge. I can make food and water, even shelter through spells. Unlike all other clerics of my station that were called to their position by a higher power. I sought out the meaning of existence and for a deity in this world that suited my needs. At least to listen to my bitching for a while when I first got here and didn’t understand where I was. I still don’t know what this is exactly, or where I am supposed to be, Hell, Limbo, or even another dimension, but it’s real enough for me. So I proceeded to worship a point in my mind with the singular goal of obtaining more understanding of the fabric of this life. Most often than not I’ve found it’s while I’m nursing a cup of mead and remembering my old life. And it’s with that power that I operate as a healer. I don’t say prayers; I don’t meditate for spells, I don’t even have to think to prepare them. I know them. And I know that I’ll always have access to the ones I need when I need them. Call it what you will. I call it convenient.
So that’s how my evenings would go. I’d shoot down nearly every request that wasn’t related to a spell in the most callous way possible. Then I’d smile at the end of the day. On occasion, I’d end up in a cave or a tent for a week with smelly adventurers that didn’t know what soap was. Or sometimes I’d end up getting lucky and sleeping in a comfortable bed in town. That was my norm. Until the night it wasn’t.
There were eight people in the bar that night, not including the owner, when a thin tower of everything I’m not, wrapped up in tight leather, walked in.
Legs slid up to me without asking around for a healer. She said something, and I didn’t listen to anything except the tone of her voice. It was calm, smooth. I don’t even remember saying, okay, but I knew I had accepted something after the entire room stopped and looked in my direction.
“Good, so you’ll help me get back the broach?” Her voice was almost too quick. But since my comprehension had come back to me, my face sunk when I realized what had happened. “Are you okay?”
She had noticed, and I took a moment to regain my composure. “Of course I am. I’m-” I thought about my regular line of bravado and snark. It didn’t seem right. “-The-“
Her bright eyes stared at me in the silence. “Are you sure you can help me? You don't look that strong for a caster.”
My lips didn’t move, my hair just furled and eye twitched. I glared at her. I must have seemed partially ominous. Besides the dirty white robe, I’m not much. I’m not very threatening. On a wet day, I'm a hundred and fifteen pounds. And that includes my everyday carry.
“Are you sure you’re the white mage?”

No comments:
Email ThisBlogThis!Share to TwitterShare to FacebookShare to Pinterest
Labels: Nicess, Nicess the Wanderer, The White Mage

The symbol of power

The third season, after that night with the orc, my spoon had become stained with red blood. The DM took my character sheet and wrote down, "Red Wooden Cooking Spoon" under one of my attack slots. It was now a magical weapon that had a +1 to attack and damage with an unknown critical bonus. He said I could feel power covering from the spoon as I held it. So I kept on holding it.

In towns, it was always in my hand. Whenever there was a fight, I was immediately ready to attack. And based on the rules in 3rd edition, I would normally have to spend an action to draw my weapon. But since no one questioned my spoon as a weapon, I usually got the first strike in. By this point, my spoon was doing actually slicing damage. I hadn't gotten a critical, but that was about to change.

We were in a fight with some bandits and had gotten to fifth level. Everyone was kicking ass, except for me. First tier wizards are still not great fighters when with a magical spoon. So I was more or less barely holding my own. Until I rolled a critical natural twenty. As it landed, the DM explained that I felt a rush magic surge through the spoon and tear open the armor of my bandit. A second later, his intestines spilled out onto the ground and he died. Everyone turned to me in awe. I held the spoon high and grinned at the other bandits in game. Their moral dropped and they gave up.

The DM took my sheet again and wrote down, "Red Wooden Cooking Spoon of Disembowelment." It has an automatic kill on a natural twenty attack roll. I was gaining strength, but I was still a two and a half foot aquatic pixie. At this point in the game, we were seventh level, about to turn eight. I had managed to stay alive and I was starting to do some damage with spells for a change, using my spoon as a wand.

All was well until we decided to steal a few magic items.

If you had to choose power, grace, and immortality at the cost of your soul, would you? What if the choice was easier than you think? Small, incremental segments of strength for a few childhood memories? The ability to accomplish your dreams, your desires, for the corners of your mind you don't often use? What if you could have everything you ever wanted and the only price would be the things that make you who you are? What would you do? Faced with a grave choice of morality, what would you choose?