Vampires Are Only Vampires When They Are Respected By Other Vampires 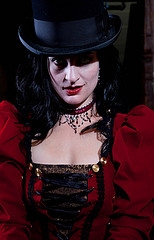 There was a time when vampires were respected by other vampires. It was some decades ago, but it did exist. The vampires of today have let themselves weaken to the level of those publicized movie vampires. There has been talk of vampires that hiss, that growl, and sparkle. Pointless posturing that leads to pathetic bravadoes of power and speed. Vampires are elegant and terrifying. They do not need to do such simple things to threaten. Their very existence is a threat to others. They are predators, the rest of us are not. They show the restraint needed to coexist in the dark circles they operate in.
With a true vampire, there is control. There is a level to which no one will ever understand. To immerse themselves among people, among food, and refrain from eating is a display of will in itself. To still a hand in front of a loudmouth that doesn't know any better is a testament to strength and nobility. The vampire I keep close to my heart never tells someone they are going to die. They merely kill them. There is a directness that has been lost in today's vampire.
In the era of Anne Rice's Vampire Chronicles, there was a sense of honor, of elegance in action. A power that knew nearly no bounds under the dark night's sky. It is that reverence I aim to resurrect. There are moments one recalls when they cherish something. Thoughts, sensations of smell, touch, a serenity that is equaled by few things. To stand before a vampire and know, not wonder, that you are alive because they have chosen to keep you so. To read a line, to let the words lift off the page as you mind dazzles to the world that has been crafted for you alone. There is a magnificence in that which no other can feel or know. It is unique and personal to each.
Vampires need to have their time of respect again. If another vampire cannot honor the domains of even a fictional vampire, we have been lost and need to be found. Thankfully, these dark days are almost over. The nights of elegance, strength, and honest fear will be brought back. On Devil's Night 2011, Demon Vampire will be released. Ushering in a new season of true vampires.
Understand that once you enter, you will never wish to return. Bring all that you are with you. The door does not forgive tardiness or indecision. Your thoughts will be tested, your morality will be confronted. Demon Vampire is not for those hoping to find another vampire story that is entertaining. It is for those that aim to understand the woes of what it means to break in to a knowledge that few will ever experience in this life. From the second it is opened, your perception will be altered and the door will be closed.
Get your copy of Demon Vampire on Devil's Night 2011 (10/30/2011)
Available on Amazon.com, Kindle, BarnesandNoble.com, Nook, & more!
Email ThisBlogThis!Share to TwitterShare to FacebookShare to Pinterest
Labels: Demon Vampire, Demon Vampire The Book, Real Vampires, Vampire, Vampires

Bravo! At last someone that gives describes the beauty of being a vampire. I commend you and adore every single word written. I certainly will be purchasing a copy of your book. I look forward to it.

Thank you. I am glad you see the vision to which I have crafted this novel. Demon Vampire will be the device that alters the current perception of vampires as we know them.

Spread the word. Demon Vampire will be unleashed upon the world soon.

Complex Post. This enter helped me in my university assignment. Thanks Alot

Honorable thanks to you Virgil Moore for sending me a message to bring me here to your blog. I am eagerly awaiting for your book to come out. It is good to see someone who knows and understands the " other " realms we live among!

I cannot wait to read this! Many thanks for the wonderful blog you have graceously written.

This piece of info is very useful for me, thank you!