Momentary Subjugation Of Prior Expectations 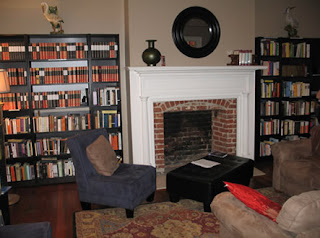 Yesterday, on December 10th, The Griffin Bookshop & Coffee Bar was kind enough to host my book signing. For that I thank them. The ramifications of which are still working their way into my subconscious. Let's label it a learning experience and move forward.

The city of Federicksburg, with all it's history seemed to be against my car that chilly afternoon. The traffic to the downtown location was increased at best, and congested the closer I arrived to my destination.
Upon entering the scene, I was met by a large group of people on the side of a cross-walk. I thought to myself "That's odd. What are all these people gathered for?" Those words would not be my last revelation that day.
As I turned onto Caroline Street, I was met with an image that only dead sailors have been gifted with. Except in my case, the over toppling waves were made out of people. In addition, each person seemed to have in tow their brother, sister, mother, cousin, aunt, uncle, and extended in-laws with them. They of course all brought separate cars. I spent fifteen minutes searching for a parking spot before pilfering one that I shouldn't have. I rushed to the bookshop to find it packed. My initial hopes that they were possible buyers seeking out paranormal fiction would later be shed.
I explained my parking situation to the owner and found I could use their back parking lot. Ten minutes later, I found it, and finally parked in the correct location. I hauled the five foot, thirty pound folding table I had brought for the signing into the store. Seconds later, the owner showed me to a two and a half foot wide table with a solid metal chair instead. The store was packed and this would be my only chance for a table. I agreed and set up half my things with the limited space.
One item after the other fell off the small, minuet furnishing. I appeared a clumsy child in a top hat sitting at a kiddy table in the back room. It was not a welcome sight in my own mind. Despite the growing internal irritations in my head, I remembered that I was there to impress my words upon those who had never read them. I trudged on.
I had amassed a list of things to aide my signing. The most helpful of all, a simple crystal bowl of chocolates. That candy dish attracted more attention than my top hat and book combined. It was a clean investment.
As I sat next to a woman with a similar set up, I discovered I was not the exclusive author to grace The Griffin Bookshop & Coffee Bar as I had imagined. Besides me, I learned that two other authors were set up with book signings that day. To my disheartened reaction, I also found the reason for traffic was a civil war reenactment, hence the explanation of the troves of people wandering the streets.
I ate a chocolate.
There are few things in this world that I cannot calm myself from the thought of. I sat, took a moment, and accepted that because of the opportunistic people undulating through the store, I would have a chance to talk about the book with a new crowd.
A brief lamentation: There are hurdles in every medium of marketing. A lesson I had assumed I had learned in detail during the year my site, DemonVampire.com had been up. I had assumed that my work on the internet would translate into numerous persons perusing through the bookstore to find me and my book, Demon Vampire. Thankfully, we both know how much of an ass I have made out of you and me for doing so.
Internet marketing in a completely different skill-set and planning base than in-person book events. Of all my fans online that are reading this, many simply do not live in the United States. Others don't live near enough to Virginia to even make the trip viable. This was the downside of my flawed logic.
Onto the obvious crowds currently perusing the bookshop. It had appeared they were there for the authors. Little did I know how true that statement was. They were the families of the respected writers. Yes, they brought all the siblings and extended in-laws I had mentioned earlier that were roaming the streets, with an added issue of friends and associates that were there for their support. My support was on the internet, or working during the time of the signing.
I was the cheese.
Regardless, it was not a letdown. I learned a vast amount more than I had expected. I even had a few conversations about the book that were meaningful and engaging. I hope to contact all five of them soon via facebook, email, or on the phone for those who are accustomed to speaking to a live person.
It was an experience that has taught me far more than I had wished. Learning is a reward for the pain of the distance you travel to get there.

I am sad to say there were no pictures taken of the event. At 4:30pm, I promptly exited and gathered my pride from the floor where I had dropped it under that diminutive table. I know that I was to show off my new cane to a few people, but that moment will have to come in a photo shoot later.

For now, I will be planning my next book signing at least six weeks in advance. I will be contacting the local newspaper, The Front Porch, as well as a few local radio stations about the upcoming event. Beyond that, I have an open invitation to come back to The Griffin Bookshop & Coffee Bar in the future for another signing.


In the meantime, You can find Demon Vampire the book in print at The Griffin Bookshop & Coffee Bar at 723 Caroline St, Fredericksburg, VA 22401. The retail of the book is $18.97 for the massive 500 page novel that weighs 1.6 lbs.

I admire your spirits! I would have gotten all depressed if I had been you.

But you're right. I myself would love to go to a book signing, but I live in a different continent and never even traveled within my own country to attend one. :S I bet a lot of the readers who follow you and have bought/read your book are in a similar position.

Maybe you should do virtual book signings through Second Life or something. I don't know how you'd actually sign a virtual book, but maybe it would serve the purpose of putting you in contact with your public, even if we don't get to see you or have your signature stamped on our books. I, for one, have attended online events several times (even some hosted in Japan, which has a completely opposite time zone, so I had to wake up at like 5 am to get online on time xD).

Anyways, don't give up! ^_^ Even if we can't go to events, there are still a lot of us rooting for you! :D And if this particular one didn't work out so well, the next one may be different.

Also, I bet it's a wonderful feeling to see your book for sale on a real bookstore. :)