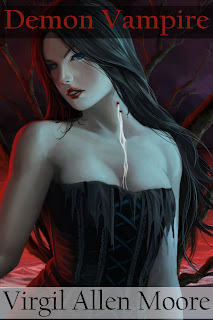 I am Virgil Allen Moore. I write the book Demon Vampire. I have been writing for over seventeen years. I began as a poet. Later, I turned to fiction. My voice carries presence in my pen as I write. It is a talent that I have used well in constructing my novel. My platform is visual aesthetics mixed with powerful character driven writing. My myths teach visceral morality in a palette that is captivating and fulfilling to readers. My type of vampire is above the fold as related to today's popular image. It is my vision that those who remember the era of Anne Rice will see my epic as the answer to the mundane vampire that has propagated in the ebb of recent social tide. There have never been vampires like mine. I have created a powerful, elegant, sophisticated type of vampires that have seeded desires and emotional ties to the world around them.

1- What was your inspiration for Demon Vampires?
Several years ago I noticed a decline in the way vampire novels were written. I grew up in the Anne Rice era and still had a fine view of vampires as elegant and powerful. The idea that a human could attack a vampire, or even take blood from them, appalled me. I set out wanting to write a novel that solved that problem. I desired an epic story about vampires that were troubled by larger ideals, not the petty teen angst that most paranormal novels pour out these days.

2- Please tell the readers a little bit about your book.
Demon Vampire is a morality tale that questions the choices of the reader. It asks if you would sell your soul for power. While this choice seems clear cut initially, you find there are complications. The demon inside Zack wants to eat his soul, part by part until he is the “abomination among monsters” as referred to in the book. Zack, and the reader are faced with the same issues, heavy morality in a dire circumstance. It presses the conventional ideals of all vampires books in existence.
Demon Vampire as a whole is set up with multiple characters painted over an expanse of 6,000+ years of history. It is a poetic ride that melds artistry with a full cast of dynamic characters. It is nothing like the force-fed vampire many have come to see in popular writing today.

3- I hope I am correct on this. Demon Vampire is part of a trilogy. If so, can you give us a little insight as to what will come and when we can expect them?
Actually, it's much bigger than that. When I originally wrote the book, it was just a stand alone. Then more ideas came up, and more, and so on. So far I have a full outline for book two, as well as concept outlines for books three through seven. And that's just the main series. The book actually has several spin offs that are full length novels. Since Demon Vampire is 242,000+ words and can literally stand on end at 500 pages, the side novels are modest by comparison. They will be your average 250 page novels. As of this interview, there is:
Demon Vampire (the main novel being released 10/30/2011),
Demon Vampire: Special Science Report 1192 (The free ebook that comes as a download companion to the main novel),
Demon Vampire: The Elder Ritual (A book about the demon vampire Salas, reflecting all of his incarnations before the main novel). It is set to be released in late 2012,
and Demon Vampire: Redgold (the direct continuation of the main storyline). It is currently being written and is suspected to come out in October of 2013 at near the length of the first novel (About 210,000+ words).
Unlike other vampire novels that have all one view point or direction. Demon Vampire novels show the histories of all the characters and how they interact with each other. The true joy comes when the reader understands how and why one character might act differently in front of others apart from the main story. That is the main reason behind the side novels.

4- The main character in your book, Zack Giver, seems like such an unlikely person for the part. What brought his character to life?
Life experiences. I wanted to show what a person with real personal issues could bring to the table. He's not the whiny or snarky teen that always has a fresh comment about every thing that comes up. When he's scared, you know it. When he's uncomfortable, you feel it. Zack Giver is the new archetype for a truly dynamic protagonist. He grows as the novel progresses. In the beginning, he's perfectly human. By the end of the novel, the reader questions if Zack is turning into a monster he fears.

5- Who has had the most influence on your writing and why?
I didn't begin as a fiction writer, I was first a poet. William Blake and Dante influenced me a great deal. When I got into fiction, Anne Rice helped to get me into vampires. I read her vision and was hooked in the elegance and demeanor of her characters. 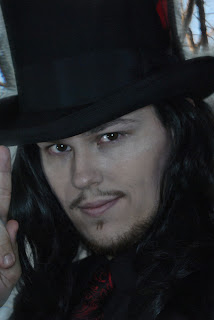 6- Who provided the cover art for your book and did you have any input on the finished product?

Leos Ng Okita. An amazing artist that I was able to find on DeviantArt.com. Thankfully, I was published through a small press that didn't have a full art department. I told them that I already had someone in mind for the cover and that I had the concept written out. They gave me the go, and I let Okita-Chan, as she likes to be called, do her best. A few weeks later, she wowed me and Erudite Small Press with a wrap around cover that was built to impress. A week after that, The cover was finalized and ready for distribution. It's been a wonderful process. I'm very happy that I was able to choose my artist. As long as she is available for Demon Vampire: Redgold, I will be contacting her for another cover.

7- I have to ask you. The pics on your blog are really classy. They remind me of Gary Oldman in the Dracula movie. Did that have any influence on the way your pics were done?

Yes and no. I've always loved top hats and full three piece suits. Apart from the fact that I have long black hair, I did mimic some of Oldman's essence when posing for the author photos on the site.
Although it hasn't been posted yet, I have a cane now to complete the picture. It has a black rose handle with a diamond shaped crystal on the far tip.
The ironic part is that Gary Oldman is what one of my characters, Salas, looks like. There is a painting of “The Lich King” that another potential cover artist did a while back that highly resembling him. 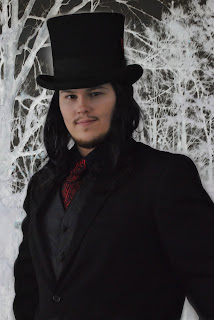 8- I know you have been writing for about seventeen years and started with poetry, what can we expect from Virgil Moore in the future?
Apart from the fourteen books that I have planned for this series alone. I do have a few contemporary pieces without any paranormal elements at all. They are nothing like the other writing I do. However, there will always be one thing that ties all of my novels together, morality. I believe that morality can be a career defining tool as a writer. The concept of reading a book knowing the end is one thing, but having to ask yourself who had it the best or worst by the end, makes you think. I've always loved the way the movie “Requiem for a Dream” did it. You see four characters and all of the hell they go through in life. All of my novels tie everyone into everything in a way that is entertaining and thought-provoking. The lowest lows are not felt unless the reader has a sense of depth. Dante said it best when he wrote, “The greatest woe is happiness recalled in misery.” I will always desire to have my readers feel the story I write, if they don't, it's lost. I want my novel to be remembered for how it made them feel the day they finished it, no matter which genre I write in. If I can give a moral that forces you to question who you are by page 500, then I have done my job. 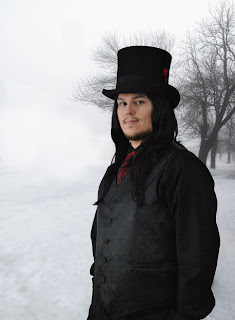 brinkka2011 says: Thenk you very much

brinkka2011 says: Thanks for taking the time to talk about this, I feel strongly about it and appreciate finding out additional on this subject. If possible, as you acquire experience, would you thoughts updating your blog with extra information? It is very useful for me.