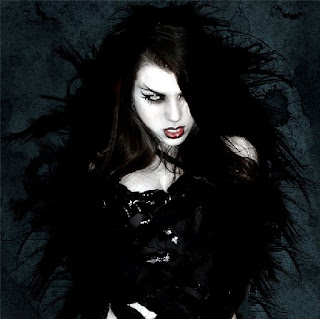 This is the alternate opening scene from my debut book Demon Vampire. It's a taste of what's to come. I hope you all enjoy it as I have.


Cold torrential water bleeds down asphalt streets as a familiar warm red liquid stains pale lips, quenching a once dry, defeated, parched throat. A Thick ominous mist tightly seals the sight of anyone wishing to view such a grotesque display. The bright glass moon is high, lighting the obscuring clouds above, creating a haunting miasma across the sky. The violently summoned strength, once used to fend off the unknown terror seeking it, is lost to the diminishing volume of blood in the vein. The fleeting effort gone, the exsanguinated body hangs loose, still in his arms. Damp, tarnished white woolen clothing dances in the sudden burst of wind, the frame motionless, a cut lifeless marionette. The blond hair thrown around the body wildly, a toy to be dangled from his finger tips. A eerily malevolent voice calls out unfamiliar words. Sharp wet osseous protrusions foretell a dark future. One of fear and death from the edge of oblivion. A fortune of an eternal lust for power to be coveted, told for the few that are willing to hear and less with those that are willing to share. As the crimson demon stands, looming over his latest meal. The last watery drops from the eviscerated jugular grace his tongue and bring a much invited calm. He is content in this morbid act. He has been bathed in the communion of murder. The stark, most-recognizable sound rings out in the distance. They are calling it, beckoning its aberrant wrath with screeching sirens and harsh shouts.
Lightning sets stunning fire to the night, shining momentary fluorescence over the dim thoroughly saturated objects that hide in the shadows. The scene has been torn, ripped from a world that has no crisp definable shape. Red spatters litter the rough ground and are soon dissolved as the primary hints of a brutal massacre. A blue sports car lies overturned, it's driver's side door smashed. Its hood shredded, rendered more than twenty feet away. It sits across the far shoulder of the road. Long open shears of twisted metal show signs of malice in its fender. Fervent Smoke bellowing off a steaming engine block, raising, adding to the fog. The concentrated cloud signals unwanted attention to him. Attracting certain one-sided vitriolic coloring to his actions. They will see him as the monster he is. His dark clothes can only hide him among the shadows of the night, not from this abhorrent display. His dark brown hair, curly wet from the rain, shades an unknown face. His black pleated long coat shielding him from the detail of the still running head lights. He is tall, slender, powerful, yet not absolute.
The fast-paced rhythm of his heart made the kill more pleasurable, but none the less usual. In either a drawn out fight gouging at his pray, or a more frequent quick midnight silent kill, they would find his trail. There was no elegance where necessity held it's sway. They will pick up these pieces, he was sure of that. The constant investigations press his mind while he remains in this town. They are persistent and confident, though they lacked real power. The wisest detective on his trail was nothing against the race from the sun. Amongst all their threats of crime and heresy, they were not a scorching fireball descending from the heavens to burn him to gray ash. The physical had it's limitations, light forever held an unrelenting dominant lean on him. A truth wielding pain and death in the well disguised rays of beautiful sunshine. Morality meant nothing in the face of the blinding day, there was the next meal, the search for cover, and nothing to debate. With each feverish kill the fear that he was becoming more of a monster was gnawing at his already thin conscience. Tearing at his mind were images of the continuing sanguinary horror that he was slowly transforming into a true demon born from the ninth level of hell itself.
There was a small seemingly insignificant part, willing to accept the evil he was doing. Convincing him the blood was necessary, persuading him to eat, to feast and siege conquest on the world. It whispered softly to him, it influenced his dreams. “This is what you are. The intriguing flavors you secretly salivate and intensely enjoy. Rip, tear, rend, and swallow the blood like milk.” It enjoyed the depravity, it sweetly craved it, yearned for it. The red apparition somehow soothing and calming, was speaking to him directly with a deep murderous growling rumble. “The vast ocean of power I can grant you. The encompassing absolution of being I offer, to walk without equal in a land of horrors and monsters. Am I truly so disgusting? Do I not tempt you? Do I not wet your palette with my menu? Is my simple price so steep, so dire and costly that you would die a fool's death to deny me what fate has allowed me to etch into the stars?”


Thank you for all your support. Please Subscribe to my blog.